“Birmingham Then and Now” at Never Yet Melted. 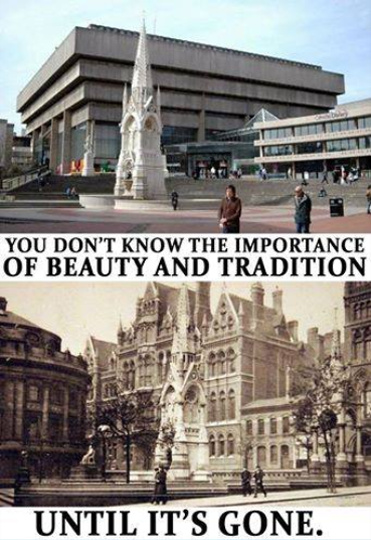 And, sadly, the vandals usually slip away un-named and un-remembered.

New in The Sentinel, ‘The coal man and the bread man have gone for good’ – how things have changed in Stoke-on-Trent since the 1960s. Memories of Goldenhill, an isolated hilltop part of Stoke-on-Trent.

Mind you, such things lasted a long time in parts of Stoke-on-Trent. In the early 2000s when I lived in Middleport, you could still see coal-deliveries being made to pensioners, with coal-sacks trucked by hand up back-alleys and into coal-sheds. The distinctive ‘annnyyy-oll-irroon!’ call of the rag-and-bone man could still be heard, maybe once every six weeks, although his horse had long gone. And the milk-float man still made milk-bottle deliveries, and you could get a pre-ordered loaf of bread delivered with the milk. Of course, it’s all gone now — flattened into brick-dust by Commissar Nevin and henchmen.

Now we have to be a little sceptical here, because… i) it seems increasingly easy to get questionable headline-grabber papers past peer-review and into the PNAS journal, judging by other recent examples; ii) the study is partly based on computer-modelling and statistical re-shaping, a method which has its own inherent problems; and iii) stone circles in remote coastal areas are far more likely to have survived into the historical record.

That said, the new paper does present an intriguing prehistoric proposition and has good evidence to support it…

“We argue for the transfer of the megalithic concept [of stone circles] over sea routes emanating from northwest France, and for advanced maritime technology and seafaring in the megalithic Age.”