Another for a hypothetical “Strange and Surreal Stoke” ceramics exhibition at the Potteries Museum. An “ent vase” by Anita Harris, who works at Longton in the south of the city.

* On Archive.org, free to borrow, J.R.R. Tolkien: a descriptive bibliography (1993). This is an out-of-print table-trembler of 434 pages. The book is deemed ‘collectable’, and thus appears to be effectively unavailable to scholars except at Archive.org.

* Newly announced at the Avila Institute, SSF279: Healing the Imagination: A Reading Course in The Lord of the Rings. Dates are “to be decided” but, judging by its position on the course-list, summer 2023 seems likely. Avila is a legitimate ‘Catholic online studies’ teaching service, with a global reach.

* A one-hour video from the “Tolkien et le monotheisme” conference in May 2022. On YouTube, with auto-translation of sub-titles to English. The conference was…

“organised by the CUFR of Dembeni in its amphitheatre. The conference is entitled ‘Tolkien and Monotheism: Religion in the life and work of J.R.R. Tolkien'” … “though the Catholic religion had a preponderant place in the life of the writer, his writing nevertheless reveals a cosmogony not simply reducable to this monotheistic religion.”

* And finally, a “family photo” of ‘Bag End’ made by a later owner. Uploaded 2018 by a descendent, and seemingly un-noticed by Tolkien historians. Regrettably a very poor and small picture, possibly taken out of an 8mm cine-reel by the look of it, with an ND grad filter on the lens. This is about the best I can do with it in Photoshop…

Definitely not a pristine glass-plate picture, but better than the source: 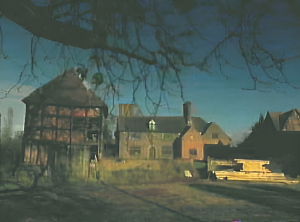 My guess would be post-war, maybe the later 1960s? There are of course many half-timbered buildings dotted about Dormston. But for confirmation of the site, cross-reference with the pictures of the real ‘Bag End’ at the Tolkien Library.

* New unseen Tolkien family photos, early 1930s. Tolkien himself is not seen, and presumably he was the one making the pictures with the camera. The discoverer of the pictures says…. “I’ll be sending high res versions over to the Bodleian shortly”, but has kindly posted low-res versions on Reddit. Tolkien is known to have gone to Lamorna Cove in 1932, but there’s no way these pictures show Cornwall. The scene could be anywhere on a lowland English river, south of the Peak and east of Exeter. Though the distinctive waterside thatched boathouse, boat-type and willow-pollarding might be able to be cross-referenced to a postcard, and thus the location identified. My guess on that would be that one would start looking around Evesham, where his brother was living. Possibly also along the River Stour over in Worcestershire or near Oxford.

* A book from late last summer, and new to me, The Road to Fair Elfland: Tolkien On Fairy-stories: An Extended Commentary (September 2022). This appears to offer the text with…

The book is on the Kindle, so the free 10% ebook sample should get you the complete preface.

* Kent State University Press has announced the book To Rule the Fate of Many: Truth, Lies, Pity and the Ring of Power (forthcoming). Thankfully it appears to be nothing to do with That TV Series, despite using a similar name. Seems to consider how … “Tolkien could encompass in his sympathy Christian religion and pagan mythology” and thus was able to craft a dynamic place in which he could deeply consider “truth, lies, pity” and bring them “onward to a more philosophical and theological treatment”.

* Tolkien’s Mythic Meaning: The Reader’s Ontological Encounters in The Lord of the Rings. A 2020 thesis for the University of Manchester, now available online.

* And finally, “Australians are LARPing”.

* A new 2023 review of An Anthology of Iberian Scholarship on Tolkien (2022). “Iberian” here means both Portuguese and Spanish. The review is in German, but the page is in HTML and thus easily auto-translated.

“Simonson [examines] the function of the trees on the continents of Valinor and Numenor, in which beauty and utility are combined. […] only the balance between materialism and aestheticization can guarantee a responsible approach to nature.”

* Call for chapters: Theology, Religion, and Dungeons & Dragons. Relevant to Tolkien, given the formative influence LoTR had on Gary Gygax’s original classic D&D. Deadline: 15th February 2023, with the chapter to be submitted by the end of the summer.

“Professor Holly Ordway will provide an enriching presentation about the life and thought of J.R.R. Tolkien”.

* From Country Life magazine, rare images of J.R.R. Tolkien from 1961. Regrettably the magazine has sandwiched the online article with an unexpected auto-playing video of a mass of crawling insects. All video on the site can be perma-blocked, by pasting the following to your uBlock Origin ‘My Filters’ block-list…

Or, if you want to perma-block all such nonsense in their online articles, videos or not…

* And finally, on the BBC this week…

“Russell Kane and his guests discuss whether the writer [Tolkien] was evil or genius.”

Seriously. That’s their blurb. For BBC Radio Four. And they wonder why few pay any attention to the BBC these days.

* An update on Signum University Press. The Press is barely six months old, but now has a firm slate for 2023 and beyond. In Tolkien studies there’s news of the book Cardinal Vices of Middle-earth (September 2023), a new “comparative analysis of the role of chosen vices and virtues” from a Catholic perspective; and “An interview series with Verlyn Flieger”.

* A casting-call for Fellowship: Tolkien & Lewis… “an upcoming limited [screen] series, based on the friendship, faith, and fantasy of C.S. Lewis and J.R.R. Tolkien.” Filming in London in early spring 2023, and the call has a rather tight deadline. Why do such projects/jobs always seem to have a ‘rush-rush’ deadline of days, rather than at least a month or so?

* Wheaton University now has its list of summer school 2023 courses. Includes “The Makings of Middle Earth: Creation, Creativity, and J.R.R. Tolkien’s Lord of the Rings“, and the “Otherworlds of Imagination in C.S. Lewis”. Seems to be aimed at regional students who want a long taster of what the university can offer. I had to look up “Wheaton, IL”, and it turns out that this well-known university is on the edge of the city of Chicago.

* Issue 2 of my Tolkien Gleanings as a PDF magazine, now available for download.

* And finally, oh dear… more PR piffle for bamboozled tourists from the city of Birmingham. The Birmingham University tower… “is famously believed to have been the inspiration for the tower of Orthanc, the black tower of Isengard”. Will the city ever learn that there’s a really moving true story to tell about Tolkien and Birmingham? They don’t have to make it up.

The Spyders of Burslem
Blog at WordPress.com.
Loading Comments...